With less than two weeks to go to the 2022 D-Zero Nationals, supported by Barracuda Bay clothing, at Brixham YC its time for the Runners and Riders List, the most accurate prediction of “form” that will no doubt fuel a frenzy of on-line betting and office sweep stakes across the nation. Before you rush to place your bets, and get excited about Euro Lottery sized windfalls  here’s the low down and options for spreading your risk.

Firstly you could look at the top of the entry list for guidance, which to me would have you risking your life savings on Paul Jefferies becoming our new National Champion, justly deserved after years of taking flak as class chairman, with Martin Latimer on the second step and “Tin Man” Dave Valentine one step down in third ……… Tim Weedon would make history by beating multiple national, european and world champion Nick Craig into fourth place. Am I on my second large whisky? …. toooo right I am. In your dreams guys ………

The fleet talent scouts, and Bet Fred stand-ins, have also been out looking to see who’s been sneaking in some pre-event training. Zippy had Liz Potter out at a winter European Training Camp (sailed in Aero’s which despite the heat didn’t melt!). Liz followed this up  with a training regime that included a sortie to the POSH regatta, other intense sailing outings and even an outward bound style 60 mile white water canoeing epic – serious stuff …. Could this be Liz’s year? The Largs bunch, ever hopeful, have been training in all sorts of weather; looking good in the heavy stuff with their San Francisco rolls perfected Billy McCarlie and Martin Latimer are looking forward to finishing some windy races with their masts upright. Jon Bassett is fast and looking confident and after a 3rd in the recent Noble Largs SC One Design D-Zero Fleet just behind a very quick, but sometimes too enthusiastic Niel Ritchie, Jon could be a top 5 contender this year. What about the Stork you might ask; well he’s entered, fit and ready to fight – he flies!

With no Dan Holman and a few top names missing this year Niel Ritchie could be a good bet for a top three and David Valentine is keen to show his windy weather pace. In the light stuff Tim Weeden could do well and Paul Jefferies is also fresh from beating up the opposition at Hunts SC. If the cameras are out “Poster Boy” Southwell will turn up the wick he can’t resist the limelight!

So with the dreaming over lets take a deeper dive into the entry list see what form says about who’ll take this year’s silverware:

Odds  on favourite has to be Nick Craig, beaten by COVID and Dan Holman last year. Nick has a record of winning numerous titles in various boats and recently took the D-One Gold Cup with 8 straight wins The smart money will be on Nick, but the odds won’t make you rich.

Who else could give Nick a fight …. Stork in the light stuff, Niel Ritchie in heavy weather, David Valentine (if he’s doctored enough of the new boats), Tom Southwell if there’s film rights on offer … who knows?

In the mid fleet the Liz Potter, Jon Cowper, Gordon Stewart, Billy McCarlie, Martin Latimer, Mick Green (rumoured to be running a new boat and new sail) will carry on their usual battle that they all enjoy be it at Nationals, Northerns or Opens ….. if points for “being there” bring people to the front who knows what surprises they might deal out.

So its all to play for ashore and afloat at Brixham on 24th-26th June, there’s no doubt regardless of who takes the top slots the winners will be the guys n girls of the D-Zero fleet who will no doubt have an epic event in an epic boat, fueled no doubt by a little epic socialising.

Watch this space for the real results

Sure bet for MC Jock of the Day – David Valentine 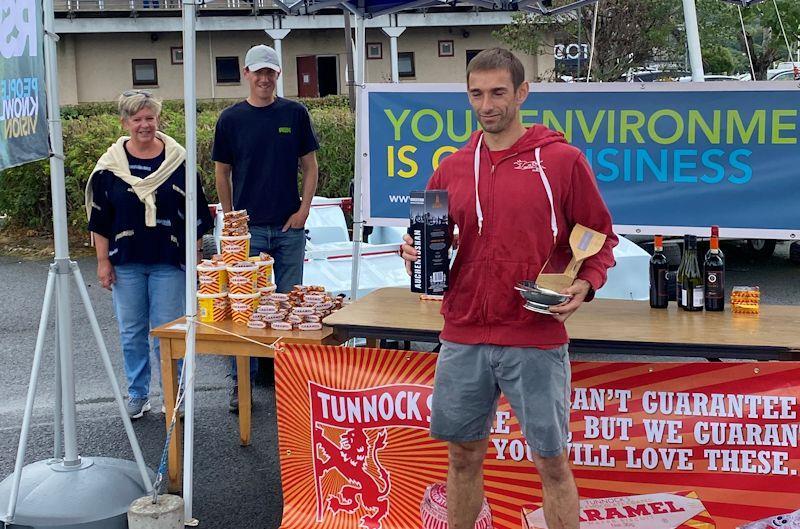 Not at Brixham to defend his 2022 Nationals title – Dan Holman

Nick Craig, fresh from his D-One Gold Cup win – is it his year to take the D-Zero title too?