An annual race week, previously known as Fed Week, and changed to reflect a more focused sailing week aimed at sailors from RS Elite to D-Zero to Optimist, and attracts sailors from all over the world and around 400 boats of varying classes.

In recent years the original drag-race between RS Aero 9 and the Devoti D-Zero has been widened (no pun intended) to include the Hadron H2 which further challenges all the sailors, and provides some interesting tactics and boat differentials and adds numbers to the fleet.

Winds are usually good, and the race area is within Chichester Harbour between Hayling and Thorney Islands and Itchenor / Witterings (except for the Elites who sail in the Bay), and managed under 4 different race starts, though it’s very busy – tides, wind management, tactics, strategy etc aswell as avoiding multiple classes – which provides very challenging for all sailors.

Day one, with 14 boats registered, the wind was building nicely to a good F2 with potentials to increase further as usual. Valentine/D-Zero got off to a good start from a Itchenor end startline, driving hard for East Head, with others chasing hard. Thinking there was wind over on the infamous Winner Bank, he unusually tacked away instead of trusting usual form of flying up the beach and through the waves. Southwell/D-Zero followed thinking Valentine knew something. Others flew up the beach and benefited, and after a couple of laps and a few miles, Millett/Hadron H2 took the bullet chased by a few D-Zero’s of Weeden and James Jenkins, then split by another Hadron 2, then more D-Zero’s. The Aero 9 had obviously got scared with the competition and downsized to a 7 rig changing fleets. Plenty of discussion in the bar afterwards, and all enjoying the social side of the week, with plenty of stick for all.

Day 2, Valentine and Southwell were out for revenge. Southwell led off the start in a little more breeze than Monday, chased hard by Jenkins and Valentine. The start this time was the Thorney/Hayling end towards the Emsworth Channel. Jones and Valentine from the pin end went hard left out of the tide and maybe a little eddy off Thorney and soon had a strong lead. Not looking back Valentine continued to build on the long beat, and despite some long downwinds and at the higher end of sailor weight (Ed: unusually polite ?! ) he managed to hold off the others over the 2 and a ½ laps of sausage / triangle, and was pleased to take the bullet. Southwell and Jenkins followed home, then Weeden and Millett losing some of their form from the day before. More discussions whilst the steel band played on the verandah.

Valentine nailing the finish (left) and Jones/Valentine just seen on right of the left hand shot at the pin. Photo Credit: Ollie Blake (apologies for poor quality as downloaded from a video)

Day 3 and plenty of nerves, Valentine just had to repeat yesterday twice more to wrap it up, no pressure then, Southwell wanted to repeat last year’s fortunes and beat Valentine, the Hadrons wanted to show their worth, and only one small error is punished quickly which is good for all sailors, keeping everyone on their toes. The wind was light so we were held ashore for a while, giving the chance for us to discuss Hadrons and D-Zero in all their detail. Finally, the PRO thought we had a chance so we left heading South off the Winner, with an interesting start on full flood and heading North. Flag Z was up, though holding off the start was fun. At the gun, Jenkins got away, Valentine tried a pin end port flyer, which nearly worked, tacking onto starboard into the flood. Word was to stay in the flood till the weed line and then tack onto port, however no weed line appeared and several were caught in the eddy just off HISC, letting the Hadrons sneak into contention. Others had headed right out of the tide though aiming to shoot to Pilsey Sands and then starboard tack to the flood down to the mark. Looking right, there was a dark wind patch coming in fast as we got 100m from the windward, though also some heavy rain cloud. As there were a few Hadrons and D-Zero’s ahead of me, all I was thinking was I’ll catch them on the next beat. However, as James Jenkins was 20m from the windward mark, with Jones, Millett and Weeden slightly to windward, a rib appeared with an abandonment flag flying. Head back to the start area, and then see. A beautiful wind-filled reach whipped us over the tide and back to the start boat where AP over A was flying. That was the end of Day 3 and Jenkins with a good potential of a win. 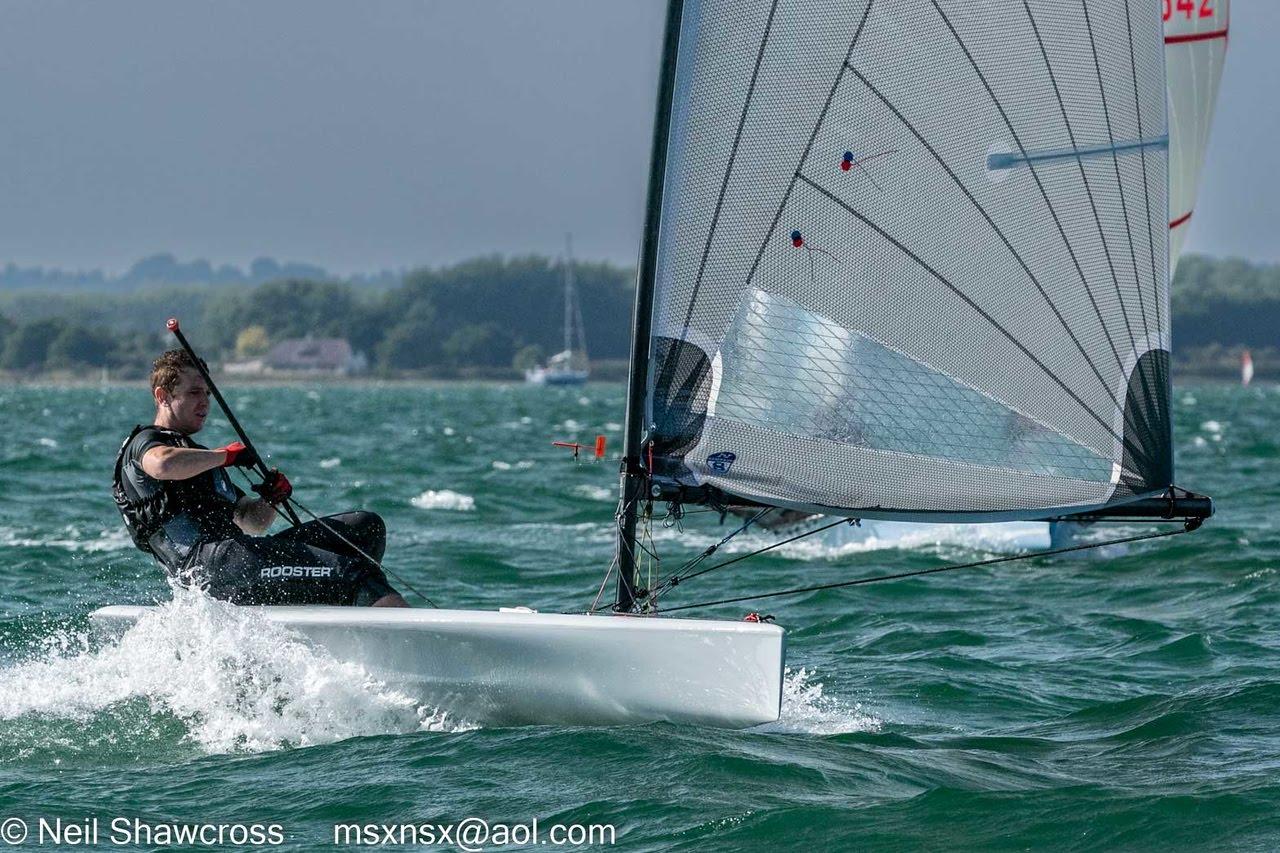 Day 4, and some Westerly wind already when Valentine arrived on the course, though several sailors had started early with a good HISC breakfast – food of champions obviously. Southwell had disappeared

Back to the usual Itchenor end start line, and a little closer to shore. James Jenkins and Valentine had spotted the Fireballs firing off at the pin end, and James rocketed off the line heading for East Head and low, with Valentine a little further up the line and in the tide. Jones went for the Pilsey Sands trick to try and get the eddy/slower tide effect, though quickly tacked back onto starboard. Holden in his Hadron was driving hard, and was consistently a threat. First roundings and it was still Jenkins from Valentine, and then another Hadron challenging. Jenkins then pulled away on the sausage downwind, and despite Valentine beating fast to the finish, another 50m was needed to take James. Three Hadrons took the next 3 places, all improving their form across the course, then Weeden, Jones and Boylin completing. Some had taken a rest day.

Day 5 and all to play for, as several places were separated by one point only. A slightly more North westerly wind and in good form was present, so pressure on ! Southwell was back and keen to show his worth, though Valentine had gained 2nds and 3rd plates before and was after the kill. James Jenkins was keen to gain a hard earned win, and the Hadrons and D-Zeros were keen to keep us all honest – Millett, Weeden and Jones weren’t finished just yet. A good start from Southwell, with Valentine and Jones pushing on, though James Jenkins had a nightmare start and was chasing from the back, with the more mature (Ed: polite and diplomatic) Peter Jenkins ahead of him after his rest day. More triangle / sausages with long beats and downhills, ensuring the sailors worked the tides, wind and waves. At the last mark, Southwell was ahead of Valentine and slightly higher, with Williams / Hadron on Valentines transom, and Jones only a boat length away, and yet Millett and Weeden hanging on in for contention. Southwell tacked away and then back for the layline, though Valentine thought he’d use the earlier start time and flooding tide to his benefit and stayed on course. As pressure built, Williams came over the top of Valentine and held to the finish. Valentine doing a quick look back and count to see if he’d snatched victory from Jenkins. On landing, and sorting trollies, Jenkins confirmed he was some way back, though a good fun week was had by all with no sailor taking more than one win !

Valentine rewarded with a bottle of Chichester Harbour Gin and a 1st plate, Jenkins in 2nd separated by a point, and Southwell in 3rd.

Next year’s week is 14th -18th August 2023, well worth an entry in your diary – lots of water action for all types of dinghy, great socials every night, a sandy beach for family or relaxing before/after, accommodation on site, super-easy entry online, with even easier sign-on/off by sailevent on your mobile, great prizes from Marine Superstore, Chichester Harbour Gin and Optimum Time, and fun though challenging racing every day.

On the 15th-19th August 2016 the D-Zero fleet have been offered a fleet start with the RS Aero 9s at Chichester Harbour Race Week. Most of the local D-Zero’s have indicated that they will be attending and joining the fun and friendly rivalry with RS Aero 9 and it would be great to see a few other travellers joining them.

It is worth noting that if all races are sailed there are 2 discards, so possible to just do 3 days and still qualify. For those with families, HISC has a great sandy beach, and a clubhouse that offers accommodation and reasonably priced catering.
Event website including online entry can be found here: http://chichesterharbourraceweek.sailevent.net/