Zippy and Friends at West Kirby and Dee Regattas

Another week, another D-Zero event and more watery stories to tell you, as 8 visiting D-Zeros joined our 3 local boats at the West Kirby and Dee Sailing Clubs Regatta Weekend! The event was also part of the Northern DZero Travellers Circuit and the visiting D-Zero’s travelled a combined 1919 miles each way to be with us. Top traveller was Niel Ritchie from Aberdeen and Stonehaven (347 miles), followed by Billy McCarlie, Martin Latimer, Alistair “Storky” Mclaughlin and Jon Bassett (257 miles). Gordon Stewart clocked 198 miles from North Herts & East Beds and Ed Deacon travelled 190 miles from Hunts SC. We’re not competitive really. Really.

The Regatta event started on Friday with West Kirby SC’s annual Round Hilbre Island Race. As the visitors were still busy working and driving, the race was excluded from the Travellers Event, so it was left to me and Mick Green to sort out the D-Zero honours (he won our last Island contest!).

The race began with a light airs downwind start, which is always a bit of a laugh for us boats! I tootled along the line, measuring the perfect space between me and the Committee boat to reach and run off into when the time came. Then with ten seconds to go, who should appear approaching my precious space and barging into my closing slot but Owner’s husband in his A Class Cat “Zippy Eater”. It growled at me to get out of the way or there’d be three Zippies, so I bore off to avoid a bad accident, not to mention a lot of marital grief. Both of us were OCS, having to re-round the start boat and try again. “Zippy Eater” was so annoyed that it stopped to take a major mouthful of the start boat anchor line. Ooops. I was out of there as quick as possible. The rest of the fleet hadn’t got too far, as it was a slow plodding run against the tide in a sloppy sea. We set off towards the shore side of the course, leaving Mick and the majority of the 40 boat fleet to wallow above the sandbank mid-channel. With me was a Finn, a Laser, a couple of Falcons and the Grumpy A Class.

After an hour, a very black, wet and low cloud appeared from my side of the shore and with it came a pleasing Force 3-4, which rapidly increased to a more worrying force 4-5. This propelled me on towards the mouth of the estuary and 8-foot standing waves. Meanwhile, the rest of the fleet sat in a windless stupor on their sandbank, waiting for their turn. By the time we rounded the windward mark, my cockpit was a snakepit of tangled mainsheet, kicker and other stuff from the continuously dumping waves. After a quick sort-out, I set off downwind, surfing like a loon towards the shallower waters inside the island. As I was first dinghy, I had to be pathfinder for the fleet and closed my eyes tightly, hoping there was no sand at the troughs of each wave. On we reached for half an hour until the Committee boat loomed into sight. We finished 2nd overall, with Mick taking 9th place. At the prizegiving, I collected 3 bottles of Trapper’s Hat beer from our sponsors, Brimstage Brewery. They happen to be Owner’s husband’s favourite and I hope they were shared out to soothe his pain in coming last on handicap.

The following day, my friends had all arrived and we lined up on the seaward fence to swap news and admire the vast expanse of no water, which is the Dee estuary. The sailors were promised that when the tide arrives it comes in fast, so be ready! All of the wind had been used up the day previously – mostly by me on that last reach – and we set off for a light airs afternoon of racing under the flag of Dee Sailing Club’s Regatta.

After a tricky start, which involved most of the fleet being swept down tide of the line at the 5-minute gun and failing to reach the start in time, the sneakier DZeros of Alistair Storky Mclaughlin and Niel Ritchie made a clean getaway. Niel held the lead until the ultimate leg, but, when pushed to the limit by Storky’s continuous beaking and pecking, capitulated into 2nd at the finish. I was one of the late starters but managed to weasel my way into 3rd place by the end. The second race was led from the start by Storky, who pulled out his lead magnificently on the third lap, when his boat got challenged by the late arrival of an RS300. As Storky is RS300 National Champion, he was having none of that and raced boat for boat to the finish, leaving the rest of us D-Zeros dragging in his wake like debris behind Haley’s Comet. The leader of this debris was Jon Bassett, followed by yours truly and Niel Ritchie, meaning that Mr Storky had won the Dee Regatta, with myself and Niel battling for second place on equal points, which Niel won on countback.

After us boats had been showered and lovingly dressed in our pyjamas, the Owners went off to Dee SC to enjoy a magical evening in the sunshine on the lawn. The beers were downed, the band played and our owners feasted on Hog roast, some dressed in their Hawaiian shirts and flower garlands, to embrace the D-Zero event’s tropical theme. 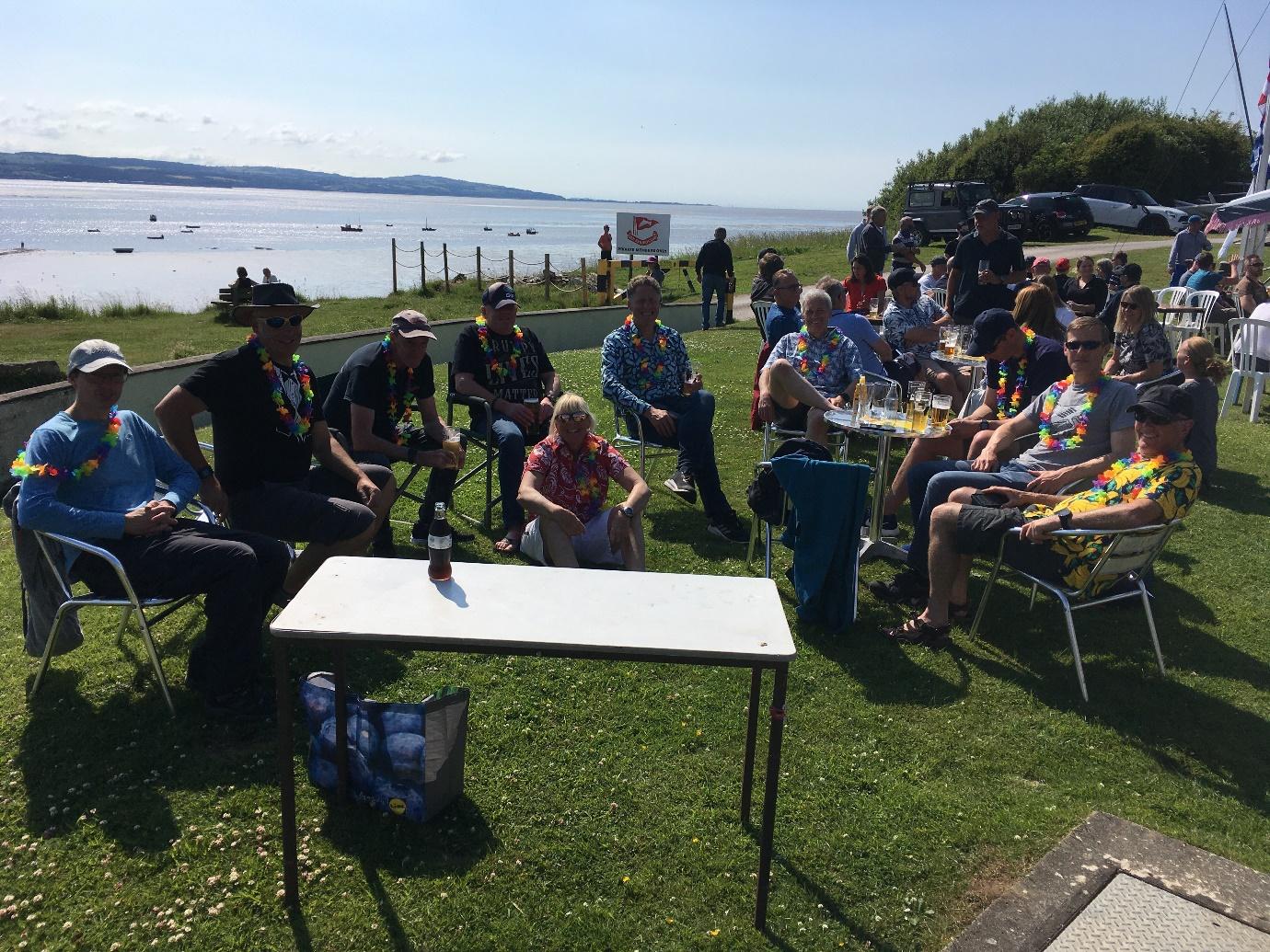 The next day was the turn of West Kirby’s regatta. One of the local Solo sailors, Martin Hartley, outed his guilty secret of wanting a D-Zero, but we boats are as rare as gold dust to buy at the moment. One of the club’s newest Owners, Paul Holmes, who was unable to make the event, kindly loaned him a boat and he went on to score a creditable 9th and 6th that day. We look forward to welcoming him into our home fleet soon! 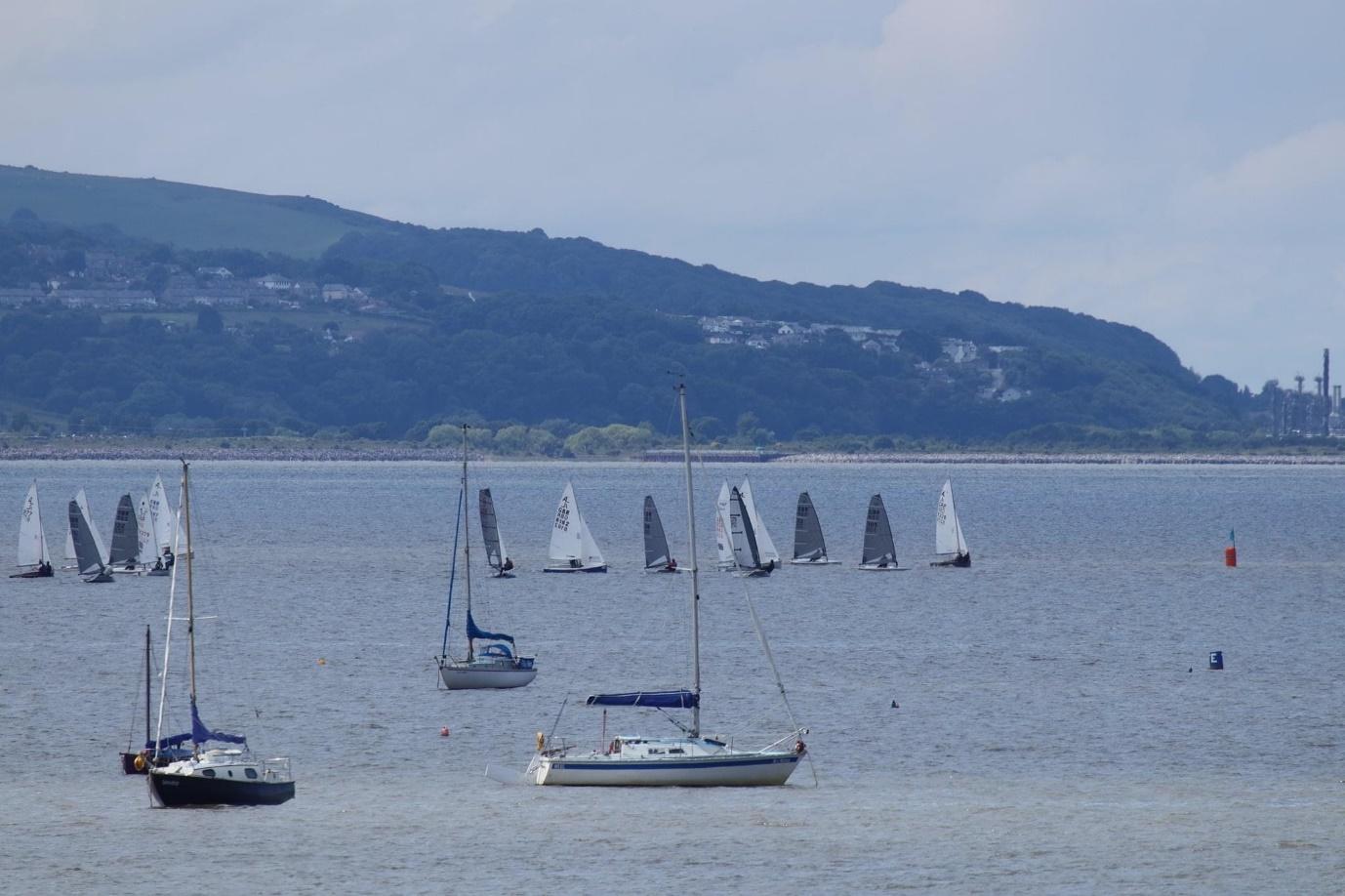 The wind had increased a little that day, but was blowing offshore, making for a tricky shifty race in significant tides. Storky revelled in these conditions and had no problem securing another distanced win from Niel and Jon. I was happily bobbing along behind Billy McCarlie in 5th place, having overtaken Martin Latimer on the previous reach. I rounded the leeward mark and tacked off to avoid the filthy air spewing out behind a gaggle of Albacores ahead of me and zoned in on the lay line for the finish. As I tacked back, an even filthier air-spewing Martin Latimer came trucking over the horizon to beat both myself and Billy at the finish. My book on “101 ways to overtake Martin Latimer” has changed its status from Mothballed to Work in Progress.

In the final race, it was another clear win from Storky, whose boat went faster than a seal on Viagra with a broom up its unmentionables. In second was Niel and third was Jon, with Gordon Stewart closing in behind them in fourth place. This outstanding performance gave Storky the series which he had won before his discard. The rest of us boats all squabbled over his first place discard rather enviously, but the overall second and third places went to Niel and Jon, with me (and Owner Liz) coming fourth. 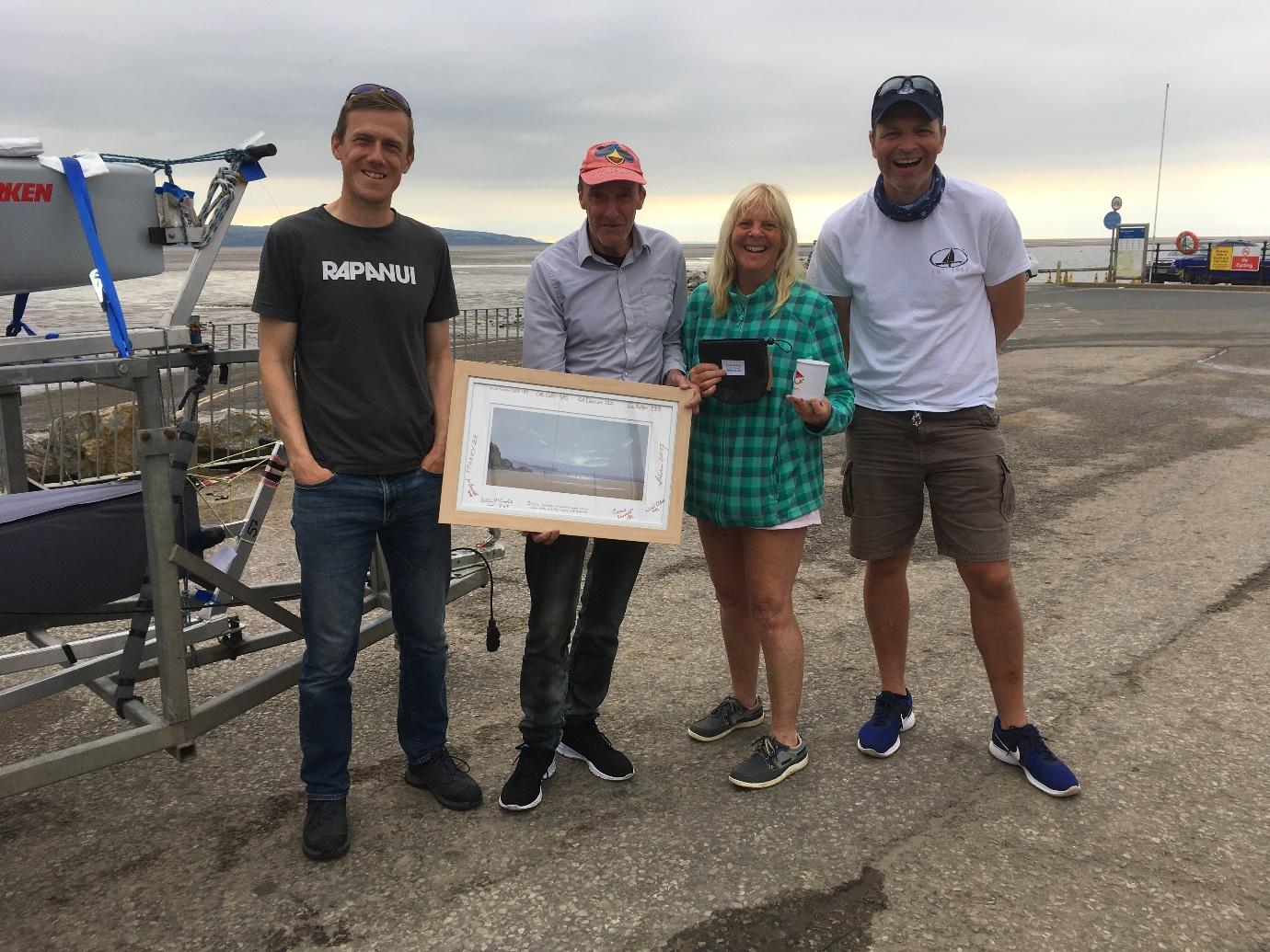 The outdoor prizegiving was a happy affair, with a whole table of prizes just for us D-Zeros, sponsored by David Valentine and DZero.co.uk. Owner put up a painting for the winner, signed by all the competitors. It’s called “D-Zeros coming ashore in light winds with no-one to collect their trollies.” 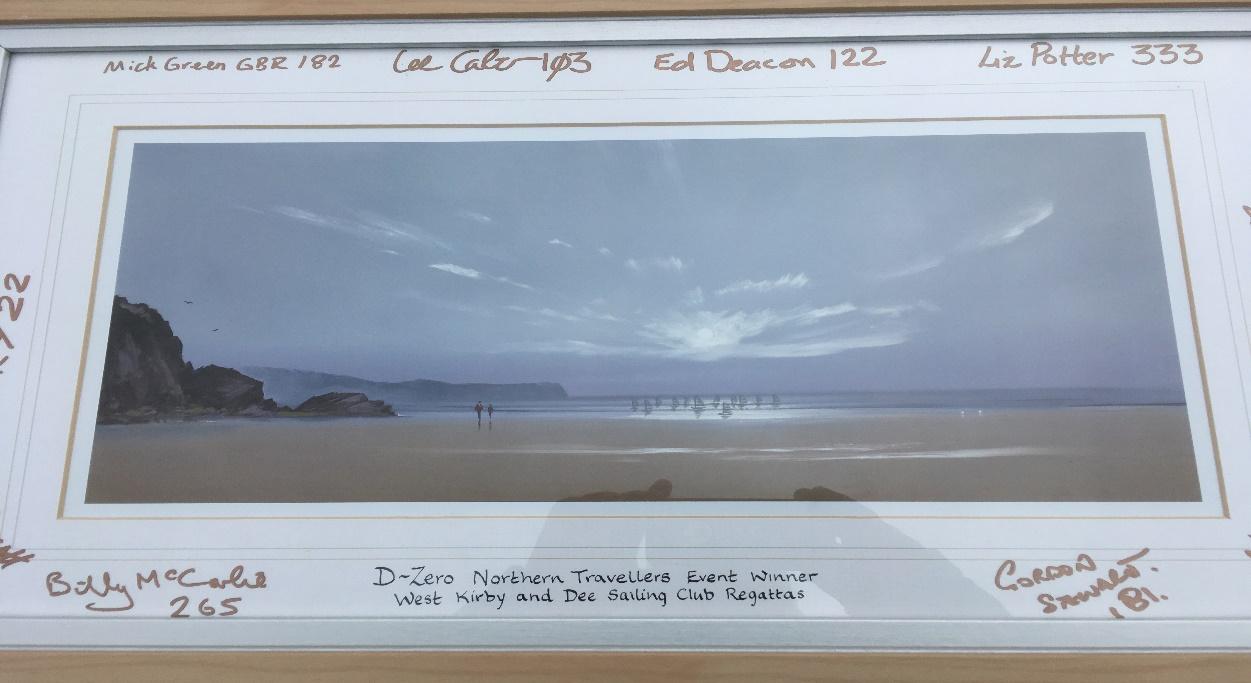 Luckily, we boats had plenty of help on the slipway (thankyou fans and volunteers); also in the boat park (thankyou Nathan Sandall for our boatie air bnb). Thankyou also to the Flag Officers at both Dee and West Kirby sailing clubs and to the army of workers behind the scenes. Once again, thanks to the Round Hilbre sponsors “Brimstage Breweries” 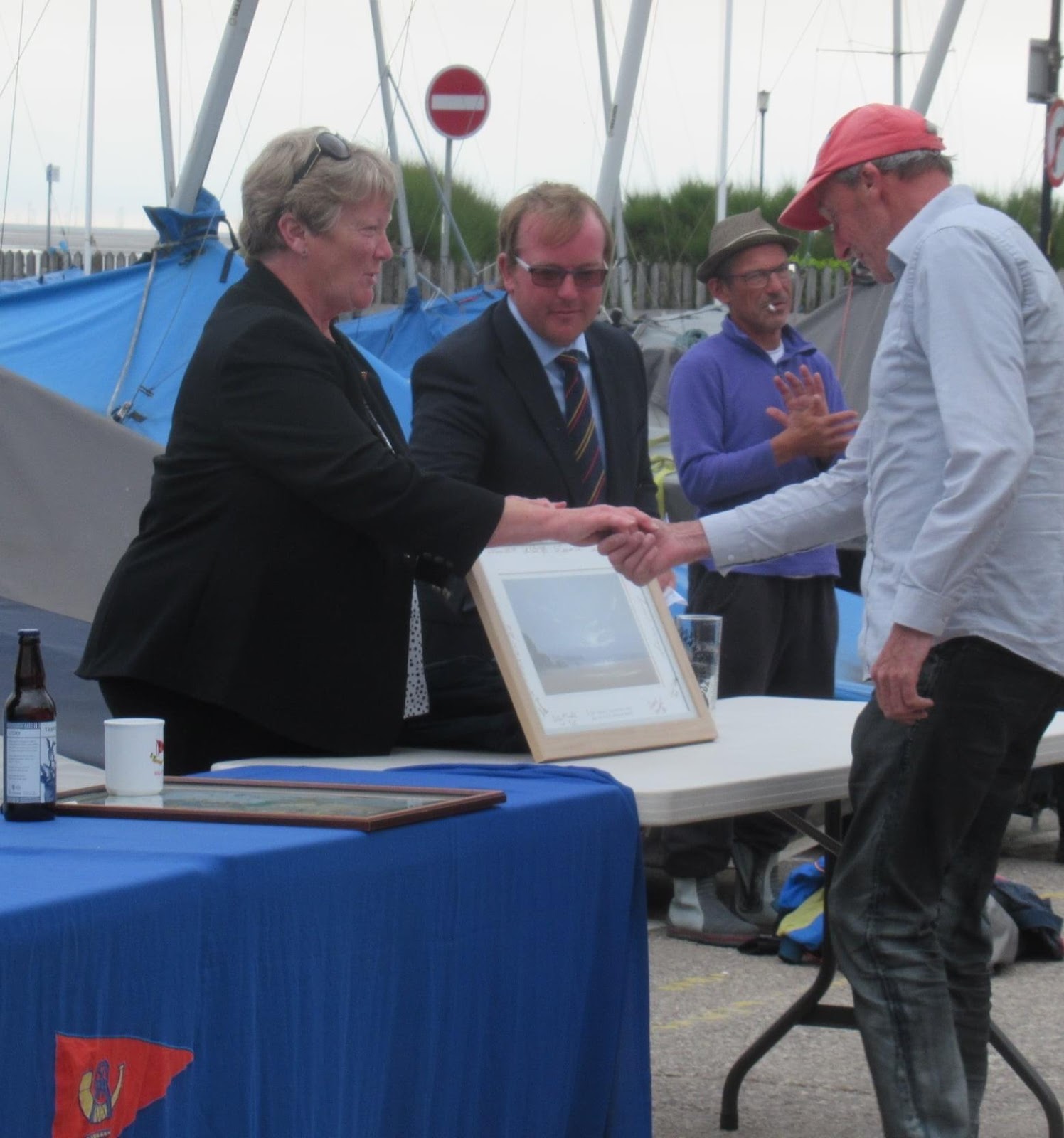 It was a truly magnificent weekend!