On the 3rd and 4th of September Stewartby sailing club hosted their first D-Zero regatta, on entering the site we were welcomed by a fantastic water sports loch [Ed: translation for suvverners – lake/reservoir etc] with generous grounds and club house.

The event entry was refreshingly relaxed with a simple sign on sheet and had attracted 10 intrepid sailors with 7 of them visiting boats, some had even travelled almost 500 miles to sail a new venue! Not much wonder with a complimentary bacon roll on Saturday morning, a great BBQ after racing and another complimentary full English breakfast to fuel everyone through Sundays racing. 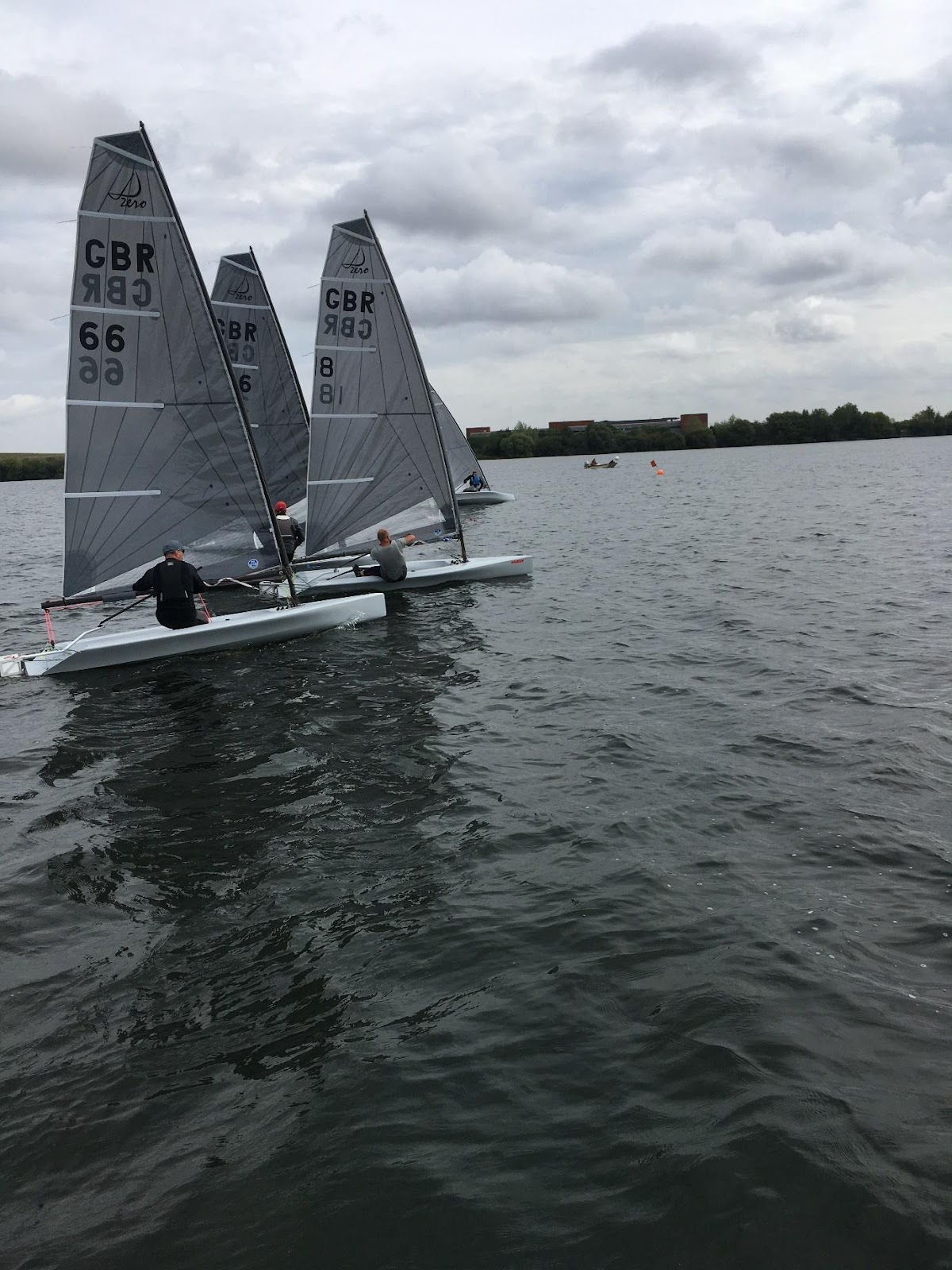 Saturday’s weather gave us some light airs and warm weather, the winds were shifty which are apparently the norm at this location. The light shifty winds made for some close racing and it became clear it was a venue where you can never give up as many places could be exchanged on a single beat, some sailors seemed to be missing the swell and salt of the sea while others were obviously feeling the heat and decided to roll the boat on the run to get a quick refreshing swim “Paul Jefferies”. Apparently, a certain big man from the Norf was attacked on the start line by a relative newcomer [Ed: cant have known the D-Zero etiquette] not once but twice though put the offender right with “I’ve told you on the last start not to do that”. All good humour and passionate racing. The winners for day one were Race # 1 Colin Glover, Race # 2 Gareth Farr, Race # 3 Gareth Farr, leaving the top 3 after day 1 being # 1 Gareth Farr, # 2 Gavin Fleming, # 3 Colin Glover.

Sunday brought more wind and a bit of cloud cover, again some nice tight close racing was seen with multiple boats coming into marks all at the same time leading to some on the water rule schooling for all. David Valentine wins the award for best save on the run, guess he wasn’t feeling as hot as Paul was during Saturdays sailing! Also, apparently there were a few interactions at the windward and leeward marks, with the word Protest used, though it went no further with some shaky hands once ashore [Ed: who would get involved in such a thing ! unbelievable]. The winners for day two were Race # 1 Gareth Farr, Race # 2 Gareth Farr, Race # 3 David Valentine. This left the top three of the weekend being # 1 Gareth Farr, # 2 David Valentine and # 3 Niel Ritchie. 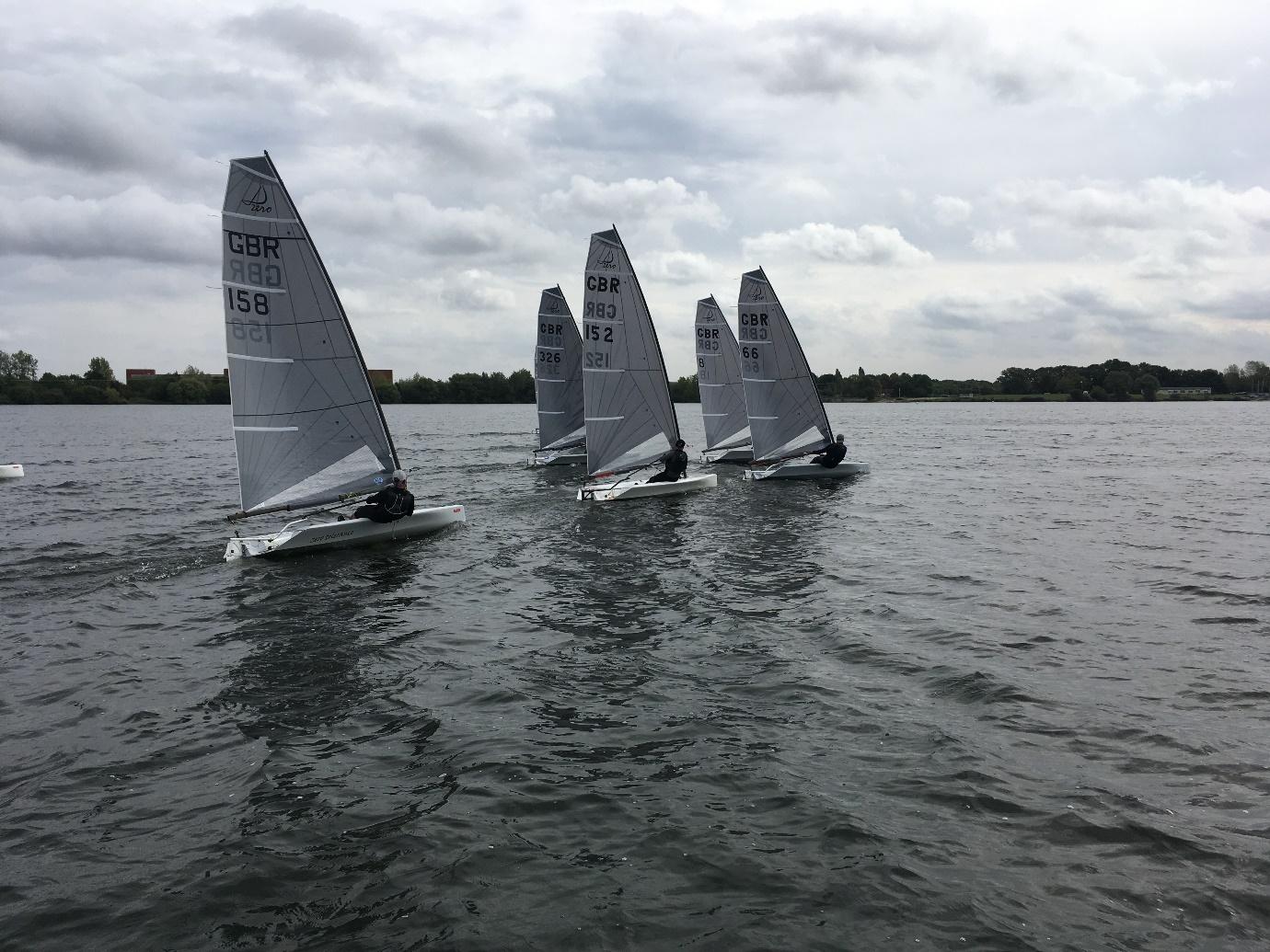 Overall we had a fantastic weekend with good competitive sailing and great company, here’s to next years event. The Race Officer stated it was a pleasure [to be the PRO] for such a well mannered fleet !

On the 3rd and 4th of September the class travels to a new venue on the D-Zero circuit and a club with a fledgling D-Zero fleet!

You can find the full notice of race here: https://www.swsc.org.uk/article/swsc-d-zero-open

The salient points are:

There is interest at Stewartby so lets show them what friendly and close racing we have in the class!